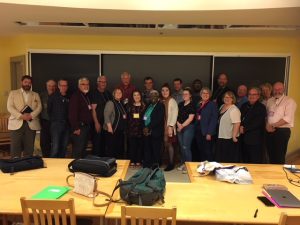 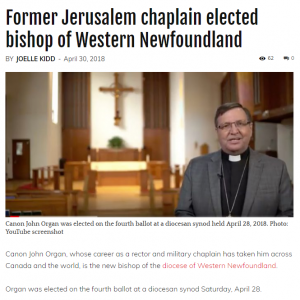 The Installation of Archbishop Ron Cutler as Metropolitan of the Province of Canada, will take place on Wednesday, November 1st, 2017 at 7:00 p.m. at the Cathedral Church of All Saints, 1330 Cathedral Lane, Halifax, NS  B3H 2Z1

The Rt. Rev. Ronald W. Cutler, bishop of the Diocese of Nova Scotia and Prince Edward Island has been elected as the next Metropolitan of the Ecclesiastical Province of Canada, succeeding Archbishop Percy Coffin.

The Archbishop-elect was ordained as deacon and priest in 1981 and elected a bishop in 2008 in the Diocese of Nova Scotia & PEI. In reflecting on Episcopal ministry, he said, “My experience of episcopal ministry as suffragan, coadjutor and as diocesan, has been one of journeying with people in transition. Working with those discerning a call to leadership both lay and ordained, with communities experiencing demographic shifts and parishes struggling with what it means to be faithful in this time and place.”

When asked to describe his vision for the Province of Canada, the new Archbishop-elect responded, “I believe that if the Provincial expression of our church is to have any relevance to the ongoing faith life of Anglicans in Eastern Canada, we must take seriously the ways in which the ‘political, economic, educational and social dimensions’ of our lives have been changing.  The gatherings of the Province may be the place where we share the ways in which we are seeking to engage God’s mission in these times and how we might best resource the faith communities where disciples are made, nurtured and formed.”

The Ecclesiastical Province of Canada consists of the Dioceses of Nova Scotia and Prince Edward Island, Quebec, Fredericton, Montreal, Eastern Newfoundland and Labrador, Central Newfoundland, and Western Newfoundland. The Provincial Synod normally meets every three years with delegates from all member dioceses.

The vote for the Metropolitan was taken electronically from May 2 to 6, 2017 by the Electoral Synod of the Ecclesiastical Province of Canada with Archbishop-elect Cutler receiving the required majority in the Houses of Laity, Clergy, and Bishops. The date of the Installation of the Archbishop-elect will be announced in the near future.

Communications for Province of Canada

The newly revamped Provincial website is essentially complete.  Links will be tested and missing documents located or the reference removed.  The Provincial PrayerCare will be posted on a quarterly basis and new documents as they become available from the Provincial Executive.

In the interim, if you find any misdirected links, please contact Jan Connors, Webmaster.

Thank you for visiting our Web Site designed to give the visitor electronic access to the Anglican expression of the Christian faith in Eastern Canada. Our Province covers a vast territory stretching from Montreal, Quebec eastward to St. John’s Newfoundland and Labrador.

This website is designed to enhance the dissemination of information about our province and each of the seven dioceses and their numerous parishes. You are encouraged to surf this site and get acquainted with the Vision and Mission of our shared Ministry in our service to our Lord Jesus Christ.

To all those who consider themselves resident in the Province of Canada you are invited to view this electronic communication resource as yours. Please feel free to offer suggestions for improvement to our Web Master. For the visitor, this site with its many links to dioceses, parishes and ministries, hopefully will assist with your spiritual needs at some level even if it serves only to acquaint you with our historical profile or a place to worship while visiting with us in person in this beautiful and inviting part of God’s great vineyard.  Every attempt is being made to keep our site current so we might support each other in the shared Ministry of the
Gospel of Jesus Christ.

A warm welcome in the love of Christ.